The performance of Re-Sounding Yardley was back at the end of June – a gloriously sunny morning in the beautiful setting of St Edburgha’s church and Old Yardley Park. Quite a contrast to some of the very cold recording sessions we had in February and March!

Coming into the project I knew very little about each of the wards of the Yardley District although I did spend a lot of time travelling back and forth along the A45 as a child! It’s been a fascinating journey uncovering little unknown pockets and I realise that in many ways we have barely scratched the surface.

One of my goals in creating this piece was to put ‘soundmarks’ of the four wards at centre stage. A soundmark is like the auditory version of a landmark – something that we hear that is unique or significant to that particular place. Before embarking on the project I had no idea what these would be but knew that some may be clear ‘attractions’ while others may be more personal to the community members. With a little bit of research, many recording trips and lots of time talking, walking and listening with the community groups we soon had plenty to work with! Whilst some of the soundmarks we found would be recognisable by many in the wards, others were very specific to the experiences of the community groups.

Here are some examples of soundmarks in the Yardley district:

BCMG were the partner organisation and I was really lucky to work with two amazing performers; oboist Melinda Maxwell and viola player Bridget Carey. Both players are amazing improvisers and happy interpreting graphic scores.

The piece had three elements to it.

Rather than just a montage of the recordings, I wanted to capture an essence of the place and did so through some subtle (and not so subtle) processing of the sound material. I also worked in multichannel which meant there were eight loudspeakers surrounding the audience to create a truly immersive experience.

I wanted the instrumental part to really be integrated with the field recordings and therefore wanted to find a way give the instrumentalists direction but also enable them enough flexibility to respond to the sounds they were hearing. In creating the score I worked with the younger community groups (Kimichi and the Stechford Beavers) to respond to the sounds we’d recorded by drawing visual representations and interpretations of the sounds and soundmaps of the areas we were in. These then formed the basis of the score.

In the performance I took feeds from the two live instruments and subjected them to some subtle processing and spatialisation around the audience. This added another layer of integration with the field recordings.

The resulting piece is hopefully a unique sonic portrayal of, and response to Yardley. In part that has come from me as the composer but more importantly it is the input, contributions and perspectives of the community members who took part that have informed and shaped the piece. 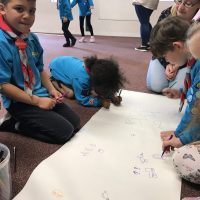 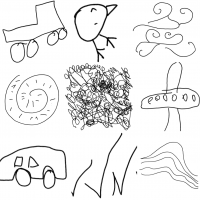