Up next in our Getting to Know series are the eclectic and ethereal Pram! The experimental pop outfit were excellent in their for-Wards performance at Martineau Gardens. We asked them to tell us a little about their experiences working with the community groups of Edgbaston for their performance ‘Under the Blossom that Hangs on the Bough‘. 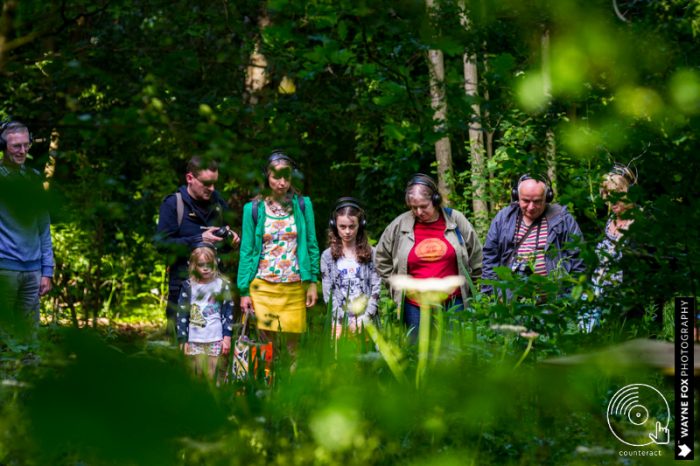 Pram were excited to work with a group at Martineau Gardens because we love the fact that it is possible to find natural sounds in the middle of an urban conurbation. We had made a preliminary visit to these beautiful community gardens and were keen to see what ideas our participants came up with out of the array of possibilities – bee hives, a bird hide, a wooded trail and the activities of volunteers working in the greenhouse, sweeping and tidying, chopping wood or making well deserved cuppas in the little pavilion.

Our group was made up of volunteers and a worker and they were all curious about the opportunity to think about their sonic environment. We played them some of our own music which uses samples and found sounds and then asked them to think about the variety of noises they might hear around them. Could they find sounds that were surprising or comfortingly familiar, abrupt or delicate, dull or metallic or even endangered in some way and likely to disappear in the future? As soon as they were confident with using the digital recorders, the participants rushed off to experiment with different ideas – all of them thinking through their usual tasks around the space and what sounds they might capture. There was plenty to choose from – the scrape of the sliding door to the greenhouse, the filling of watering cans, the hollow clunk of wood falling into a basket, the raking of leaves.

Members of the group were interested in the way that setting out to capture sounds affected the way they perceived their aural landscape. This was particularly so for a member of the group who uses a hearing aid and was already acutely aware of how different intensities of sound are translated though electronic devices.

The group were keen to be involved in the next process of making choices about their recordings and thinking of how the textures and rhythms might suggest musical features. With this in mind and given the beautiful and welcoming setting, we have decided to run two of our composition workshops at Martineau. This will allow us to develop the participants’ ideas over time and also invite our other community groups along. Our women’s group in Quinton loved the idea of the play area and sandpit at Martineau and they were pleased to find out that this wonderful open space was free to visit and just down the road. We will also be interested to see how the small managed area of Martineau compares to the more sprawling expanse of Woodgate Valley – both vital oases of calm in the second biggest city in the country.

Pram were delighted to be able to work at Chad Vale Primary School in Harborne as part of the for-Wards project. We wanted to identify four different social groups, one for each of the four wards we would be working in, and we were keen that one of these should be children, in order to reflect the ideas of this effervescent section of the community. Chad Vale was the perfect fit. 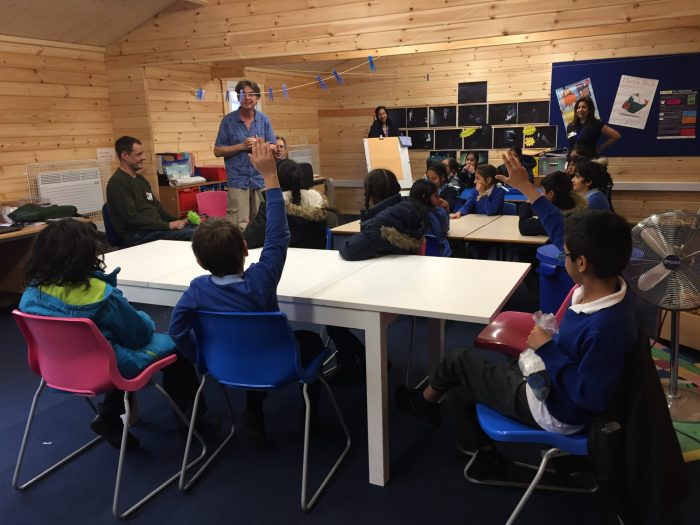 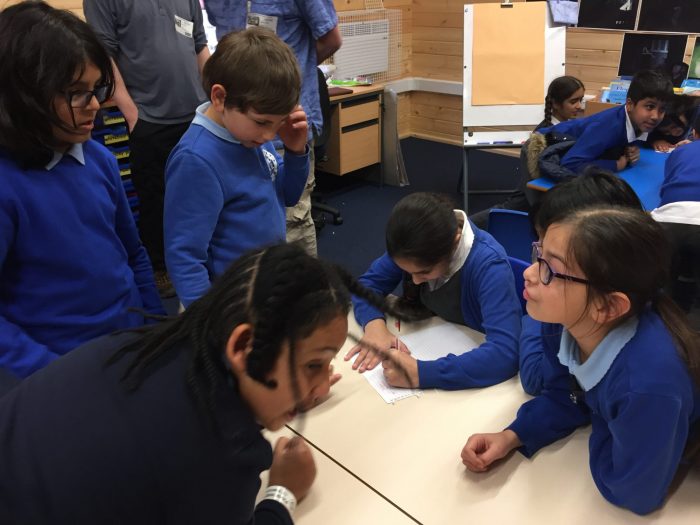 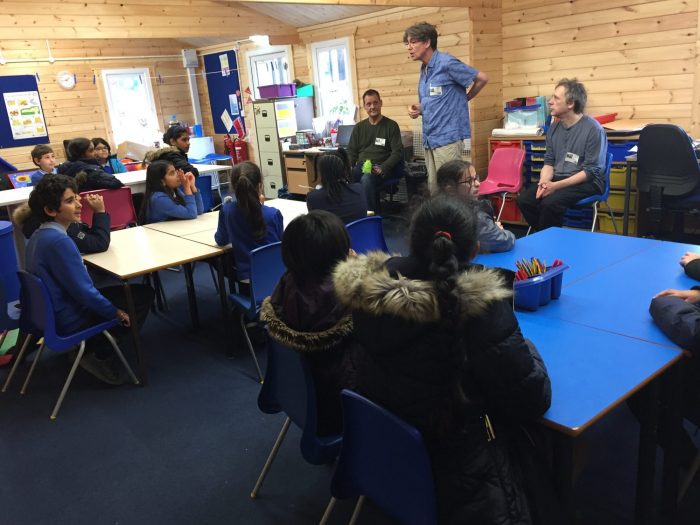 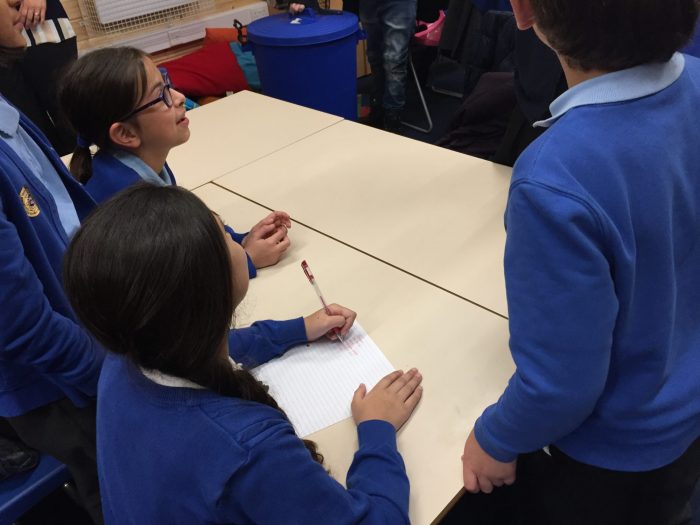 Woodgate Valley Country Park brings together many of the elements that characterise the Edgbaston District. It is a lovely open space full of trees, water features and wildlife yet it is in the middle of a busy residential area. It it is surrounded by the remnants of ancient hamlets but also contains evidence of the city’s industrial heritage. It features an old Cart Track and the remains of a once important canal link with its Lapal Tunnel running under the park, but is just on the edge of the M5 motorway. Our recording session captured many of these contradictory elements, bringing together the Friends of Woodgate Valley Country Park, made up of local residents and supporters along with Bartley Green District History Group and the park’s Rangers – altogether there was a group of about 20 of us setting out on a chilly autumnal day. 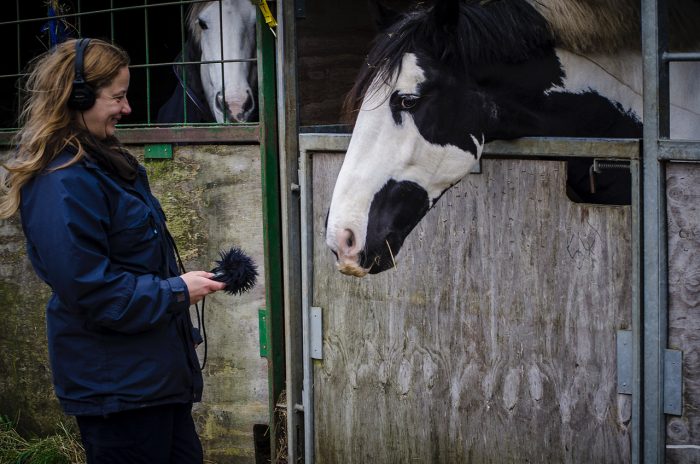 We explained the ideas behind the for-Wards project and asked the group to think about what varieties of sounds they might encounter on their journey through the Park. The History Group took a lead in shaping the walk, taking in many of the archaeological sites and speaking about their significance. At first, members of the group were shy about participating, but once they had a go at using the equipment they became quite enthusiastic about recording. They captured some of the talk about the local history and started to notice the sounds in the environment. On Facebook later, one of the group described “recording sounds of the countryside – rustling leaves, babbling brooks, breaking twigs and the general hubbub”. Soon members of the group were working on their own initiative and encouraging other participants to join in, crouching down by the Bourn Brook or getting someone to walk in a puddle or through shale whilst the other person recorded them. Luckily the group had come prepared with warm clothes and wellies!

Quinton – Women’s Group at The Haven

As the young mums met at Haven community centre Quinton for their regular full breakfast and social, the clatter of cutlery on plates and general hubbub of cheery people nattering and catching up on news washed around the welcoming space.

One of the mothers took up the opportunity to do some field recording and the sounds of the kitchen were seemingly an immediate draw for her; washing up, the kettle boiling, a teaspoon in a mug. Afterwards she expressed surprise at the volume/intensity of the everyday sounds that are the underscore to our lives, going on to explain how the school break times indicate the time of day to her due to living in close proximity to the local school and hearing the children playing outside. Another sound that sprung to mind for her was the bus, that begins running at 6:30am and stops right outside her house, like a sonic time piece that alleviates opening an eye to blearily check the clock too early!

We had our youngest participant so far during the project – a baby of just 5 weeks who obligingly made some lovely snuffly noises whilst sleeping through the whole experience. Another little girl went surprisingly quiet at the sight of the microphone, despite her mum singing songs and rhymes to her. 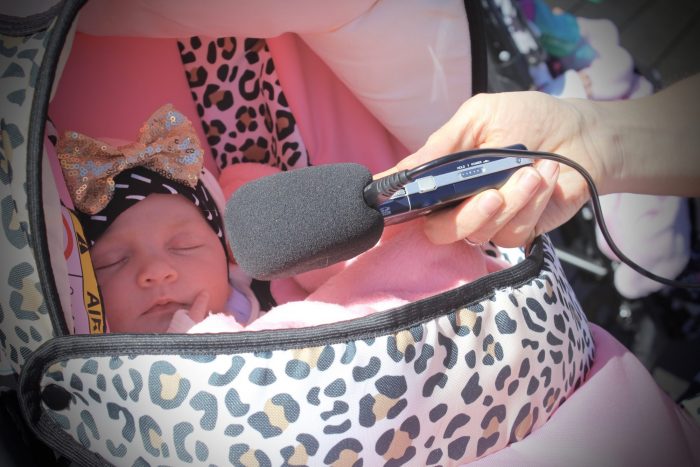 A toddler named Shay really enjoyed exploring with headphones and microphone in tow, whether his own voice, a rattly blind, the resonant metals of a radiator or propane bottle, or just some crunchy gravel underfoot. The fascination of a world composed of sound was written all over his face… at one moment he spontaneously played a rhythmic pattern made from two sounds he found on the cast iron (unlit) fire feature in the back garden, a drummer in the making perhaps?! 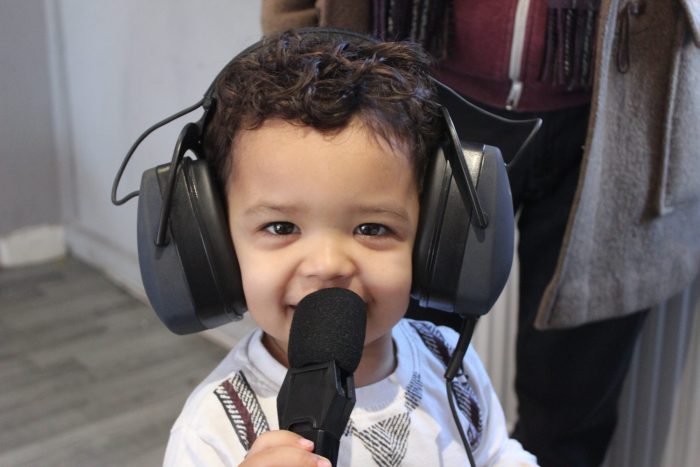